5 Tips to Maximize the Space of a Moving Lorry

There used to be a simpler time when we get that odd feeling of satisfaction in a game of Tetris. It’s the little victories that kept us going whenever we managed to score that perfect horizontal line from the cascading pixelated blocks.

Funny enough, that small sense of satisfaction can be used as motivation when moving. Just think of loading a moving lorry as a mini-game of Tetris! Thus, the ultimate goal of adopting a Tetris mindset is to maximize the space of a moving lorry.

By maximizing the lorry’s space, you’re doing yourself a favor by getting your money’s worth on lorry rental. Not to mention that you’ll only need a single trip to move your moving inventory from one place to another.

Here are five tips on how you can maximize the space of a moving lorry:

1. Do your due diligence
With Lalamove, you have the option to rent either a 1-ton or 3-ton lorry to fulfill your moving needs. You’ll need to know which lorry size is compatible with your inventory. Here are the dimensions of a 1-ton and 3-ton lorry:

Before you move, start measuring the width, length, and height of your furniture and appliances. Sketch out the space of the lorry and figure out a layout to maximize the lorry’s capacity. Feel free to talk to your lorry driver for professional advice.

Don't be that joker. Use a measuring tape!

2. The less the variation, the easier it will be
Try your best to pack your items in boxes of similar sizes. It’s easier to achieve a uniform stacking with minimal gaps when most of the boxes are of the same dimension.

4. Piece by piece
Dismantling your furniture into their parts is hard work, but it will pay off when it comes to maximizing the lorry space. It makes lifting them a whole lot easier too! 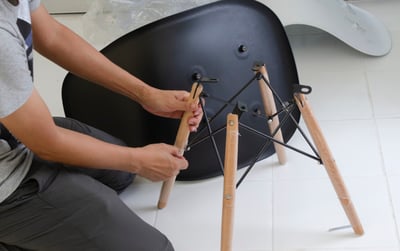 5. Utilize all the nooks and crannies
Is there a small gap between the refrigerator and the cabinet in the lorry? Adopt the Tetris mindset through and through! Try to squeeze in any item in the gap and secure the item so that it won’t move around and scrape up against each other.

Ultimately, the whole idea is to pack your inventory as dense as possible in the lorry. Don’t forget to wrap fragile items with clothes, towels or bubble wraps while you’re at it.

Reserve our lorry today and get the most bang out of your buck!

It’s easy to forget how integral the role of business logistics is in the daily hustle and bustle of an automotive workshop. More often than not, wetrue

If going out for a quick shopping isn’t an option for you right now, then you’ll love our Buy4U service! More than just delivering, our motorcycletrue

Note: this article was updated to reflect our new app that will be launched on 16 January 2021!

Are you using Lalamove solely to deliver a singletrue

How To Build Your Personal Delivery Fleet With Lalamove App